Because of Sam television debut 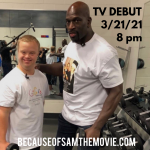 FOR IMMEDIATE RELEASE WEDU/PBS to Broadcast the Television Debut of Tampa Documentary Film, Because of Sam, World Down Syndrome Day – Sun., March 21st, 8 PM The film chronicles the inspirational life of Tampa Homecoming King Sam Piazza who was … END_OF_DOCUMENT_TOKEN_TO_BE_REPLACED